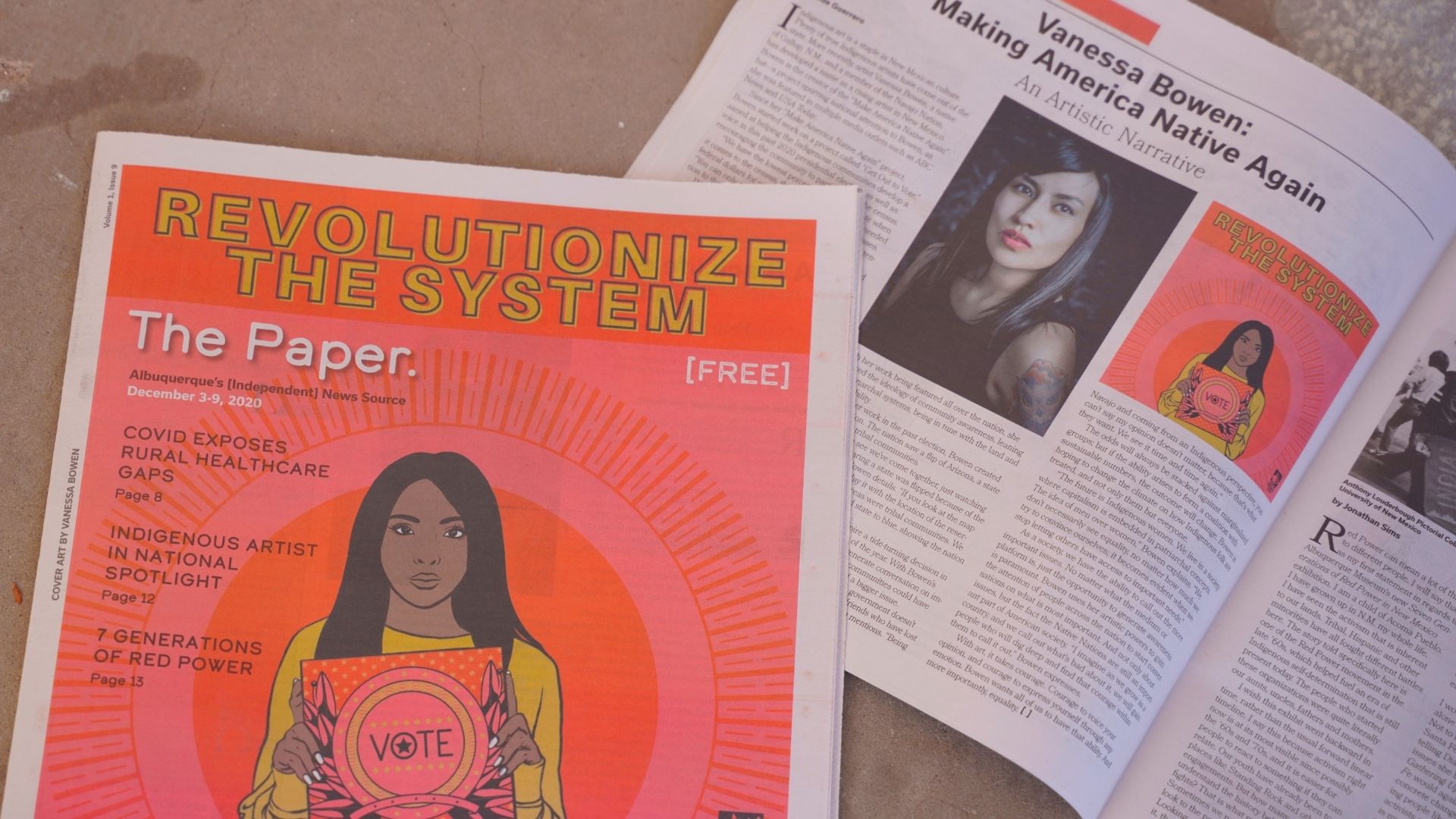 Indigenous art is a staple in New Mexican culture. Plenty of true Indigenous artists have come out of the state. More recently, artist Vanessa Bowen, a native of Gallup, N.M., and a member of the Navajo Nation, has developed a name as a rising artist in New Mexico. Bowen is the creator of the “Make America Native Again” hat—a project spurring national attention to Bowen, as she was featured in multiple media outlets such as ABC News and USA Today.

Since her “Make America Native Again” project, Bowen started work on a project called “Get Out to Vote,” aimed at helping the Indigenous communities develop a voice in this past 2020 presidential election, as well as encouraging the community to participate in the census.

“We have the lowest percentage response rate when it comes to the census, therefore we miss out on needed federal dollars for our communities,” Bowen expresses. “You can only put out so many pamphlets drawing attention to the issues, but people don’t want to read that.”

With Bowen’s background in graphic design, she had the ability to capture the attention of the Native communities to express the importance of being involved in the bigger picture.

“I love to do artwork revolving around communities’ well-being, either through activism or getting out messages about public health,” Bowen explains. “During the start of the pandemic, I teamed up with Lee Francis, who’s a part of Native Realities and Red Planet Books & Comics, to support artists who were affected by the pandemic.”

To Bowen, Francis and other local artists, 2020 was supposed to be the year. Francis curated some concepts and messages for Native creatives to provide artwork in order to create an image for their concepts. Bowen stepped in and made an image of a Navajo woman, with the message of “Resilience Means Common Sense.” Bowen’s message from her “Navajo Woman” piece was to relay the importance of washing hands, wearing a mask and social distancing.

“It was cool how the project progressed. I was able to recreate it for an organization called Amplify Arts, which later drew attention from [arts-activist collective] The Illuminator based out of New York wanting to display the piece on the side of the Manhattan hospital,” Bowen says.

As the contemporary artist gives representation for Native American people, Bowen explains, they often have to display the notion that Indigenous people are still here. With her work being featured all over the nation, she stressed the ideology of community awareness, leaning on matriarchal systems, being in tune with the land and sustainability.

With her work in the past election, Bowen created a call to action. The nation saw a flip of Arizona, a state known for its tribal communities.

“It’s great to see we’ve come together, just watching the news and hearing a state was flipped because of the Native Nations,” Bowen details. “If you look at the map of Arizona and overlay it with the location of the reservations, all the blue areas were tribal communities. We turned a historically red state to blue, showing the nation we are still here!”

Bowen’s art helped inspire a tide-turning decision in one of the biggest moments of the year. With Bowen’s ability to use art as a way to generate conversation on important issues, the Indigenous communities could have seen this as a duty to be a part of a bigger issue.

“You can look back and say the government doesn’t have our best interest, and I’ve had friends who have lost interest in the voting process,” Bowen mentions. “Being Navajo and coming from an Indigenous perspective, you can’t say my opinion doesn’t matter, because that’s what they want. We see it time and time again.”

The odds will always be stacked against marginalized groups; but if the ability arises to form a coalition with sustainable numbers, the outcome will change. Bowen is hoping to change the climate on how Indigenous folk are treated, and not only them but everyone.

“The future is Indigenous women. We live in a society where capitalism is embedded in patriarchal concepts. The idea of men over women,” Bowen explains. “We don’t necessarily see equality, no matter how much we try to convince ourselves; it becomes evident when we stop letting others have access to important needs.”

As a society, we have the ability to call out the more important issues. No matter what the medium or platform is, just the opportunity to generate awareness is paramount. Bowen uses her artistic powers to gain the attention of people across the nation to start conversations on what is most important. And not only about issues, but the fact the Native Nations are still an important part of American society. “I imagine as we grow as a country, and we call out what’s bad about it, we will gain people who will dig deep and find that courage within them to call it out,” Bowen expresses.

With art, it takes courage. Courage to voice your opinion, and courage to express yourself through any emotion. Bowen wants all of us to have that ability. And more importantly, equality.

“Design with an Indigenous perspective”